Why jokes still have a place in medical imaging

November 5, 2012 -- Radiology is a serious profession, of course, but it is a mistake to take ourselves too seriously all of the time. We need to remember that we are humans and not robots. Computers do not understand jokes. Also, keep in mind that the patient is not a machine and doctors are not mechanics.

One of the greats of radiology was the late Dr. Ben Felson (1913-1988), a radiologist from Cincinnati, U.S. He founded the journal Seminars in Roentgenology in 1966 and wrote a famous "Letter from the Editor." There can be few authors who write a radiology textbook in a conversational style and include jokes and anecdotes, yet this is precisely what he does in his Chest Roentgenology (1973).

The book is designed to be read from cover to cover, unlike the average textbook. He described the well-known silhouette sign and visited a New York hospital to see a friend shortly afterward. Felson relates how he slipped into the back of a film reading session, sitting between two residents.

When a film was put up, one resident whispered to the other, "There's the silhouette sign." Felson asked what is was and the resident gave a perfect description attributing it to "some fellow out West." The resident then called out "middle lobe disease" and Felson acted impressed. The chief then said, "Oh, Dr. Felson from Cincinnati is visiting us today. Would you come to the front, Ben?" As Felson passed by, the resident hissed to Felson: "You son of a bitch!"

Felson is in the tradition of science writing when the first person is used and the impression is given that the writer is sitting opposite the reader and describing the work. So much of modern science is either written in the third person, which is supposed to be more "scientific," or there may be no writing at all and the book is a collection of tables and bullet points. However, it is essential that we retain the human particularly in our computerized world. A fascinating collection of Felson's essays was collected posthumously as Humor in Medicine (1989) and should be required reading for all radiologists.

As Felson said, humor can be with our patients, colleagues, or friends on an everyday basis in the form of kidding or the "light touch." Humor has a great value and makes us appear more human and humane. Many of our encounters are serious and humor makes us more relaxed. I often tell jokes and stories to patients to put them at ease and build rapport -- however whilst the joke is new to the patient, my long-suffering assistants have heard it hundreds of times!

Q: Why is there no aspirin in the jungle?
A: Because the parrots eat 'em all! (Paracetamol)

Q: Why didn't the radiologist marry the radiographer?
A: Well, they saw through each other!

Some jokes are more risqué and are for internal consumption.

Q: What is the advantage of the double-contrast barium enema (now CT colonography)?
A: Well, you can pass wind and everyone thinks it's the patient!

There are many examples of radiology in cartoons. A common theme is that we are all walking skeletons -- "The wife and kids!" are a family of skeletons (fig. 1). The "charming little portrait" of a radiologist's wife is a skeleton (fig. 2). This acts as a memento mori -- "Remember you will die." We are all mortal and we are not as different from our patients as we imagine. 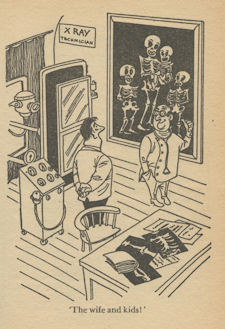 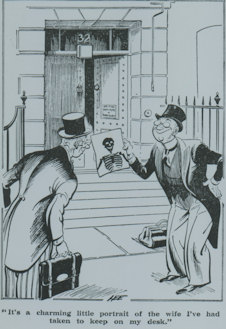 Fig. 1 (left): "The wife and kids!" are a family of skeletons. Fig. 2 (right): The "charming little portrait" of a radiologist's wife is a skeleton.

Some of the themes are naughty -- the inappropriate hands seen on the chest x-ray (fig. 3) -- or the x-ray machine damaged by the well-developed female patient (fig. 4). X-rays are naughty and show things that should be kept secret. 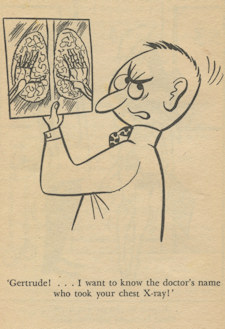 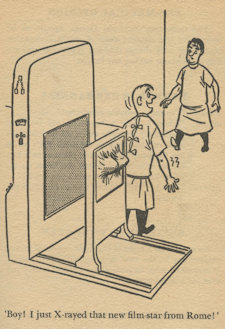 The French cartoonist Claude Serre (1938-1998) was a master of black humor. He ridicules the insensitivity of modern hospital care in this cartoon of a laughing doctor and the sad and bemused patient who is alienated by the treatment that he is receiving (fig. 5). 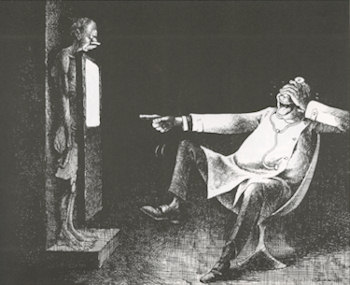 In the second Serre cartoon, the bored radiologist is looking at the TV test card projected on the fluoroscope, and again the poor patient is ignored and alienated (fig. 6). Serre was a master at depicting alienated patients suffering modern healthcare from an insensitive medical staff. 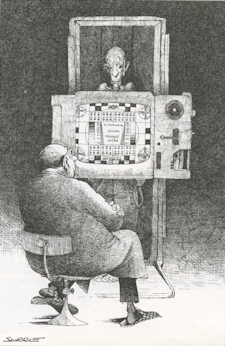 So, good use of humor can definitely help. Do get copies of the books by Felson below and read them. Look out for books by Claude Serre. Remember that we are humans and not robots. Computers do not understand jokes. Also keep in mind that the patient is not a machine and doctors are not mechanics!

A: I have just lost an electron.
B: Are you positive?

Teleradiology flourishes from humble beginnings
Many imaging departments now offer a 24/7 service, with overnight scans being reported via a teleradiology link. But it hasn't always been that way. History...

Radiology's graveyard: Extinct exams you may not know about
Modern imaging has replaced many of the older radiological techniques. These older examinations often involved considerable technical skills from both...

Global gathering celebrates life and career of Marion Frank
A celebration of the life of the well-known international radiographer Marion Frank took place in London last Saturday. The organizing committee for the...

40 years of CT: Facts you may not know about Godfrey Hounsfield
The first public announcement of CT came on 20 May 1972, and it changed radiology forever. But there are many myths and misconceptions about the early...

It's time to celebrate another x-ray pioneer's centenary
Wilhelm Conrad Röntgen may have discovered the x-ray but it was Max von Laue who unraveled how it worked. Read about their work as well as how the...
Copyright © 2012 AuntMinnieEurope.com