VIENNA - Siemens Healthcare wants its customer base to get more social. To that end, the company is using this week's ECR 2015 to launch teamplay, an ambitious healthcare IT platform designed to promote interaction and collaboration among its users.

The idea behind teamplay comes from the social networking world, where a revolution in peer-to-peer communication and information exchange is playing out. Siemens believes that the radiology world could benefit from a similar phenomenon, especially given the many pressures facing today's imaging practitioners.

To that end, teamplay is the company's effort to build a social network among its customers. The company has hundreds of thousands of users in its installed base, all of whom could learn from each other in an organized environment, the company believes.

Teamplay is a cloud-based platform that can be installed as an app on multiple types of devices and computers. While it aims to leverage the power of big-data analysis, at its front end is an easy-to-use interface that serves as a gateway to important site data in a dashboard-style format. 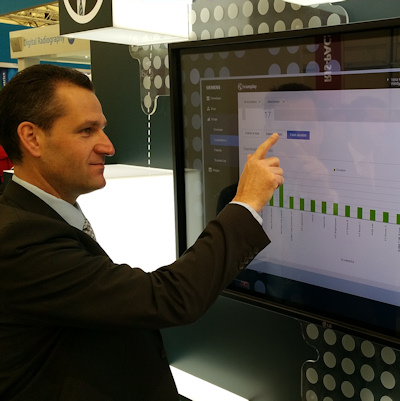 Siemens hopes teamplay goes viral as a platform for collaboration and interaction.

For example, teamplay users can see the types of imaging exams their site is performing, as well as monitor important issues such as radiation dose per exam and by scanner, as well as sentinel events such as dose alerts. But more importantly, it also allows users to benchmark their own results against those of similar sites in the teamplay network.

Not everyone wants all of their key operational data visible publicly, so data circulating in the teamplay network are both anonymized and pseudonymized to ensure confidentiality. To ensure reliability, teamplay is based on Microsoft's Azure cloud hosting platform, the same platform that underlies Apple's iCloud offerings.

Siemens plans to roll teamplay out to beta sites in April, with initial users focusing on employing the platform to manage their radiation dose levels. The next teamplay application after that will be utilization, with image sharing to follow.

With respect to image sharing, Siemens wants teamplay to become as intuitive and ubiquitous as Dropbox, the commercial file-sharing application. As with site data, images are anonymized for user confidentiality.

Healthcare IT isn't taking up all the space in Siemens' ECR 2015 stand, however. The company is also promoting Acuson P500, a new line of handheld ultrasound scanners, with the Frosk edition as the first system in the family.

The scanner can handle general imaging applications such as abdominal, small parts, renal, pelvic, vascular, 2D obstetrics, and gynecology, as well as basic evaluation of cardiac functions, Siemens said. It will come with five transducers: one curved linear, one phased array, and one endocavity probe, in addition to two high-frequency linear probes.

Siemens expects to begin shipping P500 Frosk in April. It has received U.S. Food and Drug Administration (FDA) 510(k) clearance, and the European CE Mark is expected by April, Siemens said. It will also be available worldwide, and product registrations are in progress for other major countries.

Other Siemens technologies on display at ECR 2015 include Magnetom Amira. The 1.5-tesla MRI scanner launched at RSNA 2014 offers the same technologies found on flagship scanners but sports lower operating costs thanks to its Eco-Power design, which monitors and controls helium.

Eco-Power enables Amira to achieve power savings of up to 30% when in standby mode, and in combination with the system's zero helium boil-off technology, it can produce savings of up to 20,000 euros per year, compared with the company's Magnetom Symphony scanner.

Mobilett Mira Max is a mobile digital x-ray system that ECR attendees are getting their first look at following the system's launch at RSNA 2014. The unit comes with Siemens' Max (multiple advances in x-ray) technology, which improves speed of operation. 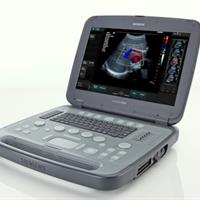 Siemens readies new handheld ultrasound unit for ECR
Handheld ultrasound systems represent a rapidly growing segment of the ultrasound market, and prospective purchasers will soon have an additional entrant...
Siemens to cut nearly 8K jobs in final act of reorganization
As part of an ongoing effort to streamline its corporate structure, the parent of Siemens Healthcare said it would cut 7,800 jobs from its global workforce.
Siemens Healthcare profit dips in Q1, division to get new CEO
An unfavorable revenue mix and higher R&D expenses contributed to a 13% drop in profit for Siemens Healthcare in its 2015 fiscal first quarter. The company...
IMRIS teams with Siemens for Sahlgrenska order
Image-guided therapy developer IMRIS will provide its Visius Surgical Theater with intraoperative MRI (iMRI) to Sahlgrenska University Hospital in Sweden...
Siemens unveils new SPECT system
Siemens Healthcare has launched a new version of the company's Symbia E system that is designed to fit into smaller rooms.
Copyright © 2015 AuntMinnieEurope.com