Pelvic MRI for endometriosis can be performed anytime

August 24, 2015 -- Endometriosis patients may be assessed with pelvic MRI at any time -- even during menstruation, according to a new study in the European Journal of Radiology. The researchers found no differences in the conspicuity, size, or extent of endometriotic disease at any point in a woman's cycle.

The small, prospective trial compared pelvic MR exams during menses and midcycle in women with laparoscopically proven endometriosis or a high clinical suspicion of deep infiltrative endometriosis. The research team, led by Dr. Elissa Botterill, a consultant radiologist from the radiology department at Austin Health in Heidelberg, Australia, found there was no difference in pelvic MR scans on either menstruating or nonmenstruating women (EJR, 6 August 2015).

"Our study demonstrates no statistically significant difference in the imaging appearances between menstruating and nonmenstruating scans, suggesting timing of pelvic MR can occur independent of the menstrual cycle," Botterill and colleagues wrote. 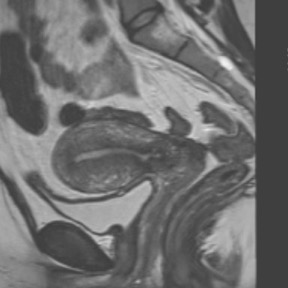 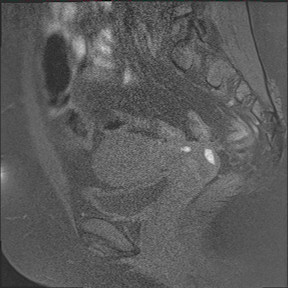 Sagittal T2-weighted imaging through midline uterus demonstrates a T2-hypointense nodule in the torus uterinus that has an associated T1 fat-saturated hyperintense nodule within. All images courtesy of Dr. Elissa Botterill.

Endometriosis is a common disease affecting women of childbearing age, with an estimated prevalence between 5% and 15%. Pelvic MR is often used in the preoperative assessment of endometriosis, as it provides an excellent overview of disease extent and is highly accurate.

Clinical assessment of endometriosis is optimally performed during menstruation, as it is thought the disease is more active and implants are more likely to be large and tender, according to the study authors. However, the optimal timing for pelvic MRI to assess endometriosis is uncertain.

"No studies to date have addressed the effect of the menstrual cycle on MR interpretation in the setting of known endometriosis," they wrote. "The literature presents conflicting recommendations with regard to the optimal timing of MR, with no studies to support the recommendations suggested."

Some authors have reported that MRI is best performed early in the menstrual cycle to detect small hemorrhagic foci, while others report midcycle scanning as optimal to ensure maximal T1 hyperintensity of endometriotic blood. Still others recommend performing imaging independent of the menstrual cycle.

Who's right? That's exactly what the researchers sought to find out.

The study included 31 patients who were imaged using a 1.5-tesla MR system (Magnetom Avanto, Siemens Healthcare). They imaged in the supine position with a phased-array surface coil and received 20 mg of intravenous hyoscine butylbromide (Buscopan, Boehringer Ingelheim) just prior to imaging to minimize bowel peristalsis. High-resolution 3D T2-weighted images were obtained in the coronal plane.

Both readers independently recorded overall and site-specific image quality using a two-level categorical variable with a rating of nondiagnostic (classified as artifact that results in imaging that is not clinically useful or of borderline clinical utility) or diagnostic (classified as either no artifacts or minor artifacts that do not adversely affect clinical use). 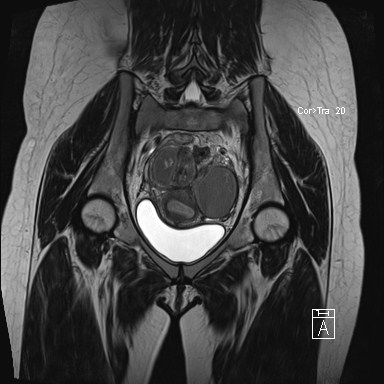 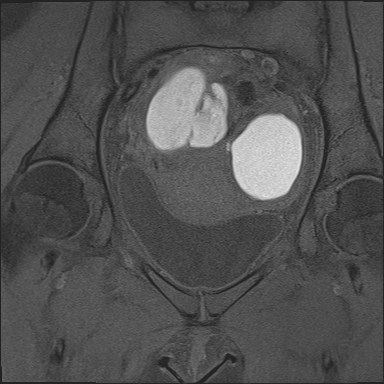 "Findings suggest no significant differences in image quality, disease extent, or disease severity between menstruating and nonmenstruating MR, thus timing of pelvic MR for assessment of endometriosis need not be influenced by the menstrual cycle," the study authors wrote.

The study has some limitations of course -- namely its small patient size. A larger cohort of patients would improve the study and could be performed in the future, according to the authors. Also, ideally, patients would be controlled for hormone therapy status, as this is a potential confounder.

Comparison of endometriosis appearances both pre- and posthormonal therapy also would be of interest to determine the best time to optimally assess patients with MRI, they added. 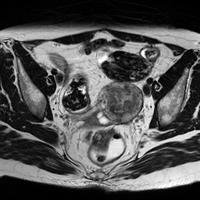 DRK: Study shows MRI supports detection of endometriomas
HAMBURG - MRI can be used to detect endometriomas, difficult-to-detect cells from the lining of the uterus found outside the uterine cavity, and also... 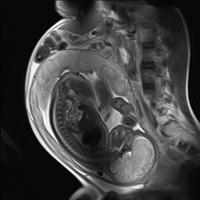 New recommendations published on imaging and pregnancy
The U.K. Royal College of Radiologists (RCR) has updated its guidelines on the measures routinely taken in imaging departments to protect unborn children...