July 21, 2015 -- LONDON - It was a Friday afternoon experiment steeped in controversy and repeatedly rejected by reviewers as being unscientific and unsuitable for publication, hardly believable, and simply a joke. But in the interests of art initially and later science, the clandestine research was conducted as the first-ever MR imaging study of human coitus, and the authors' persistence paid off when the BMJ featured the nine years of work as the last article of its Christmas edition in 1999.

Last week, Dr. Pek van Andel, a physiologist from the Faculty of Medical Sciences at the University of Groningen in the Netherlands, reflected on his group's work and the battle for research freedom at "The Curious World of Radiology," an evening seminar organized by the British Institute of Radiology (BIR).

"It had to be clandestine," he said. "Both the head of women's medicine and head of radiology said it could be done, but only under the condition that it was clandestine with nothing on paper."

Image of coitus from the famous Dutch study of eight couples imaged by MRI during sexual intercourse. All clinical images courtesy of Dr. Pek van Andel.

During the BIR lecture, titled "Love between the magnets," van Andel drew on his fascination with the intersection between art and science to describe his team's series of experiments that used MRI to study the anatomy and physiology of human sexual intercourse. In essence, he aimed to find out whether taking images of the male and female genitals during coitus was feasible and whether former and current ideas about the anatomy during coitus and during female sexual arousal are based on assumptions or facts. His mother was a professional sculptor, and he traced his artistic interest back to these roots. 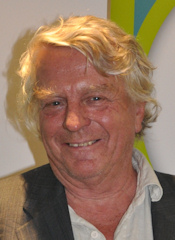 To boost understanding of HIV and AIDS, Dr. Pek van Andel is keen to image a gay couple, but admits that political sensitivities are rife. Image courtesy of BIR.

Former ideas about human coitus originate from the work of Leonardo da Vinci's Renaissance drawing, "The Copulation" in 1493, and a study published by Dr. Robert Dickinson in 1933, van Andel noted. In the BMJ paper, he drew comparison between his findings and those of the historical representations of the sexual act.

"The first scan was so iconoclastic, so different from the da Vinci drawing, that immediately I knew it had moved from being an explorative study to a scientific study," he said. "It cut new ground in terms of anatomy, physiology, and imaging technique."

In effect, the MR images of the female sexual response and the male and female genitals during coitus are feasible and beautiful, van Andel continued, "and the penis during intercourse in the missionary position has the shape of a boomerang and not of an S as shown by Dickinson."

The images also show that, in contrast to previous knowledge, there was no evidence of an increase in the volume of the uterus during sexual arousal.

Men and women older than 18, with intact uterus and ovaries and small weight and height, were recruited and asked to provide informed consent. Privacy and anonymity were assured, and participants were free to leave the study at any time. Thirteen experiments were performed with eight couples and three single women.

The experiments relied on couples being able to perform under highly technological conditions. Couples had sexual intercourse in the MRI tube after the table had been removed. Images of the pelvis were taken with the woman on her back alone, then in face-to-face coitus. After the man left, the woman was asked to "autostimulate" to achieve orgasm. Images were taken at preorgasm and at 20 minutes after orgasm.

The experiments were carried out between 1991 and 1999. During the early experiments, the Philips Healthcare 1.5-tesla MRI system (Gyroscan S15) required a relatively long acquisition time (52 seconds) and had a relatively poor signal: noise ratio with low-quality images and many movement artifacts. In 1998, one man took sildenafil and succeeded in complete penetration, long enough for sharp images to be acquired.

"We showed that it was indeed feasible to do this. The couples did what they were asked to do, and it was possible to scan them. Interestingly, because the MRI protocol did not have a program to scan the coitus, it was set as a so-called 'scan of the liver' at the maximum possible weight of 150 kg [to allow for two people]." 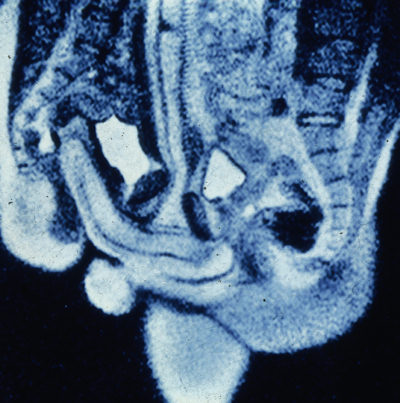 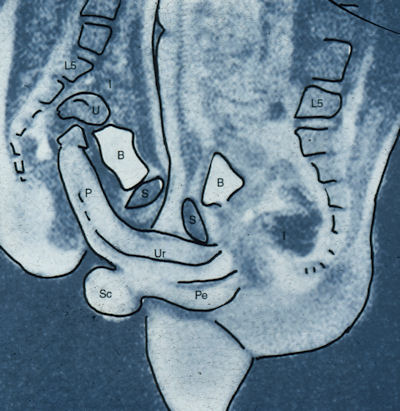 The study protocol received ethical approval, because on theoretical and technical grounds the technique was not deemed to present any harm to the volunteers, who were all consenting adults. Likewise, although hospital managers were reticent to agree initially, they capitulated when they realized the research was harmless.

Van Andel explained that the images obtained drew interesting comparisons to the hypothesized anatomy of human coitus, as drawn by da Vinci and Dickinson.

During missionary position intercourse, the penis is not straight, as drawn by da Vinci, Van Andel added.

"The penis has a hanging part that gets twice as thick and long, but internally there is a part that is as long and thick, and this part is as important as the external part," he said. "This is different to the da Vinci image, but we see this with ours. Da Vinci drew this five centuries ago, and nobody had ever checked the truth of it."

Sexual arousal and the bladder

In 2000, van Andel won the satirical Ig Nobel Prize for medicine for "improbable research" (i.e., research that makes people laugh and then think). Since then, he has also studied the bladder.

"They taught this to us in medical school, but it is nonsense because this was caused by the bladder," van Andel said. "Every woman knows they have to pee after making love ... it is possibly associated with survival value in that a woman needs to urinate as quickly and as much as possible after sex to flush away eventual pathogenic micro-organisms. This is less important for a man who has a longer tube [urethra] and, therefore, has less threat from pathogens."

Sequence of MR images showing filling of the bladder during coitus.

The researchers also reported that their images showed upward displacement of the uterus and lengthening of the anterior vaginal wall but hardly any change in the position of the uterus during sexual arousal, unless it was caused by insertion of the penis.

"There is value in this for gynecologists," van Andel remarked. "The images will help gynecologists conduct vaginal examinations with more accuracy and with less discomfort or pain to the patient."

He added that he would like his work to inform practice.

"Family doctors and urologists often use a finger into the back passage to determine whether a prostate is enlarged or not, and this (prostate) has never been visualized until we did a study. This has been published and now has didactic value in medical teaching," he said.

In the future, van Andel is interested in imaging a homosexual couple with a view to improving understanding of HIV and AIDS, but he admits that unfortunately it is rife with political sensitivities.

The original BMJ paper is available to view here.