40 years of CT: Facts you may not know about Godfrey Hounsfield

May 14, 2012 -- The first public announcement of CT came on 20 May 1972, and it changed radiology forever. But there are many myths and misconceptions about the early days of CT and its chief inventor, Godfrey Hounsfield. In our latest history column, we look at some of them.

As a Nobel Laureate, Hounsfield had a brilliant school career

Not really. He left school with no qualifications, and the only degrees he received were honorary. His father told his teacher that Godfrey's bad work was due to "intellectual retardation" and not enough blood getting to his brain! His nephew Andrew said that Godfrey thought that school was a waste of time. He believed exams don't matter, and we should not be deterred or misled by lack of qualifications. He was awarded the Nobel Prize in 1979, was a fellow of the U.K. Royal Society, and received a knighthood and many other awards, and yet he remained modest and understated in his approach to life. 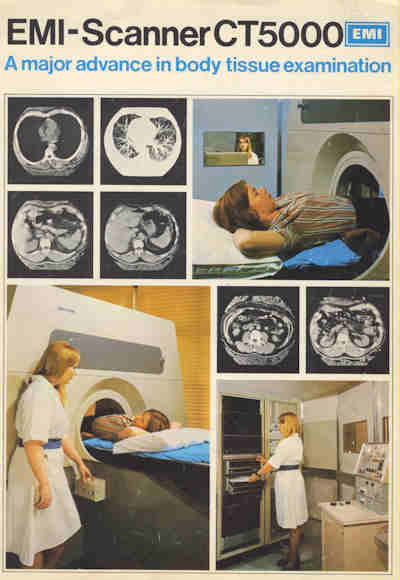 The first EMI CT5000 scanners were installed in 1975 at Northwick Park Hospital, U.K., and the Mallinckrodt Institute of Radiology, and the Mayo Clinic in the U.S.

Hounsfield had a university-level grasp of mathematics

Not at all. Hounsfield trained with the Royal Air Force at Faraday House, and his maths know-how was mostly at school-leaver level. Godfrey thought in a different way, and he said, "You've just got to use the absolute minimum of maths but have a tremendous lot of intuition." He used mental models and analogies, and this could be challenging to those more formally trained.

There is a story of the early days of the scanner that the director of the Central Research Laboratories at EMI sent a mathematician to see Hounsfield. This was to satisfy EMI that Hounsfield actually knew what he was doing, and also to offer him help. The mathematician is described as being of the "old school" and he apparently went away somewhat stunned by the novelty of the ideas. Hounsfield was not able to prove whether the ideas would work by the time experimental vindication arrived.

Hounsfield must have had a very precise mind

Well, only when it mattered. When asked when he joined EMI, Hounsfield's guess was that he joined the company in 1951. He actually started at EMI on 10 October 1949, as confirmed by his 25-year award in 1974.

This is an urban legend, although it is widely believed. There is no evidence for it. EMI Music did not fund EMI Medical. 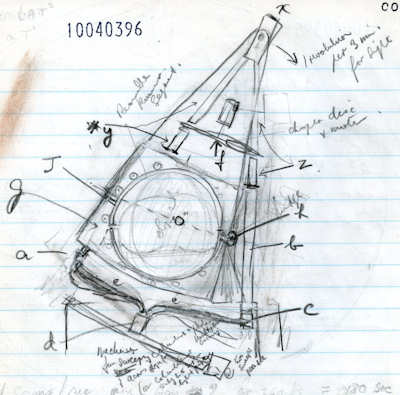 Illustration by Godfrey Hounsfield showing the concept behind body imaging.

Radiologists were immediately convinced about the value of the EMI scanner

This may have been the case when clinical images were being produced; however in the development stages, most radiologists approached said there was no market. The concepts were in a different direction to contemporary ideas in radiology. The U.K. Department of Health and Social Security were believers in the proposal, but developing a full-sized machine was beyond their research budget.

The development of the EMI scanner had an enormous budget

You would have thought so, but this was not the case. Hounsfield and his team worked on a shoe string. The lathe bed used for the experimental work was left over from a previous project. The CT/EMI scanner was made using off-the-shelf items. There were plenty of ideas, but no money. Hounsfield persuaded the DHSS to help with funding, but they had very little money. Surprisingly the design of the prototype cost a mere £69,000 (86,400 euros). The sale price of the scanner in production was £120,000 (150,300 euros). The scanner itself involved astonishing engineering. The next generation of scanners was more complex, and so could not use off-the-shelf components.

When Hounsfield attended the neuroradiology course at Albert Einstein College of Medicine in New York with James Bull in May 1972, the visit was well-funded and prepared

Again, you would have imagined this was the case, but the presentation was added at the last moment to replace the talk submitted by Bull. There was considerable excitement when Hounsfield showed his images taken on the prototype scanner at the Atkinson Morley's Hospital, London. After the presentation, Hounsfield was persuaded to go around different hospitals to show his slides. He had not brought enough money, and so had to stay in a student hostel that cost $5 a night. However, he came away with 12 orders, which put the group on the map.

Images of Hounsfield's own abdomen, taken on a prototype body machine in the laboratory. They were shown at the Bermuda conference in 1975.

Actually the first body scan was performed on a very thin engineer, Tony Williams, who could fit into the head scanner. The initial images on the Emerald body scanner were of Hounsfield himself, and reputedly he recognized in the images his lunch of crisps and beer eaten at the Blue Anchor pub! The EMI team presented the body images at the Computed Cranial Tomography International Symposium and Course held in Bermuda in March 1975. When Hounsfield showed the image of his abdomen, the audience let out a gasp, followed by a standing ovation. By October 1975, there were EMI Emerald body scanners at Northwick Park Hospital, the Mallinckrodt Institute of Radiology, and the Mayo Clinic. The production model was marketed as the CT5000.

So we now have CT today, and the modality is helping millions of patients. Modern scanners are much faster and more detailed images, but basically are little different from Hounsfield's first proposal in 1968. Hounsfield was one of a kind who thought in a different way from most of us. He wanted to encourage the young generation and those who teach them. "Each new discovery brings with it the seeds of other, future, inventions. There are many discoveries, probably just around the corner, waiting for someone to bring them to life. Could this possibly be you?" he asked.

It's time to celebrate another x-ray pioneer's centenary
Wilhelm Conrad Röntgen may have discovered the x-ray but it was Max von Laue who unraveled how it worked. Read about their work as well as how the...

Europeans played key role in early days of contrast media
When you administer your next dose of contrast media, spare a thought for Dr. Torsten Almén from Sweden and others who did the important early development...

The early days of PACS: Who were the true pioneers?
PACS has transformed the practice of radiology, but which European hospitals were the pioneers and trendsetters? In our latest history column, Dr. Adrian...
Copyright © 2012 AuntMinnieEurope.com

Forum Comments
4 comments so far ...
2/20/2014 3:41:20 AM
Capnh
I worked as a porter at Northwick Park Hospital from 1971-1973. I remember taking  patients to be scanned in a huge scanner - we were told that some of the steel used in its construction was from a scrapped battleship - 6 inches thick - because it was not possible to but steel that thick 'off the shelf'. I'm wondering what kind of scanner that was? - as this article refers to the EMI scanner being installed in 1975? I worked there with Julian Flack and Anthony Bradshaw amongst others.

3/12/2014 4:57:31 AM
Jonba
I was a radiographer working in the Medical Physics department at Hammersmith Hospital in London from 1969 - 71.
The department also built a chamber which, I believe, was for measuring radioactive isotopes occurring in humans recorded in a space with minimal background radiation. The steel plates were made before any atomic explosions and therefore had only natural radioactive materials in them which could easily be measured and accounted for as background radiation in the chamber.

3/5/2017 11:22:14 AM
Peter H
I invited Godfrey Hounsfield to give a lecture immediately after his Nobel Prize was announced. I spent the day with him. He was quite emphatic that the funding he obtained was thanks to the Beatles. He didn't enlarge on how this came about, but he had a very clear brain and spoke very simply so there was no misunderstanding.

Throughout my career I tried to interest others in this idea but most people say "Oh yes, how interesting" and promptly forget.

Recently I regularly visited a friend in a hospice, who was dying from a brain tumour. He had been scanned many times. I knew he had worked at Thorn/EMI but didn't know exactly when. I told him about the Godfrey Hounsfield story involving the Beatles. My friend remembered it well because he was the administrator who ensured that Hounsfield received the funding that he needed. There is absolutely no doubt in my mind that the Beatles are very important indeed in the history of the Scanner. We drank a toast to Godfrey and the nurse joined in wishing him Cheers! Cheers to both of them!

I expect the management at the company wanted to claim all the credit, so they wanted people to believe they had been wise enough to fund this work, and probably denied that there was any truth in the Beatles story, but this activity was largely carried out beneath their radar. There would have been no paper work.

It is very clear to me that both of these men, Hounsfield and his administrator friend, were very honest people and told it like it is. (Well, apart from fiddling the funding ...)
7/5/2017 10:32:59 PM
ct54
I was lucky to meet Godfrey Hounsfield when he came to Australia in 1975 to visit the 3 sites at that stage that had installed EMI MK1 CT scanners. We all went out for a posh dinner at the Hilton.The story he told was that EMI had made so much money out of the Beatles that they needed to do R & D to reduce the tax burden. EMI was not only turning out records but they had a huge electronic division and gave out research grants in both USA and UK. I can remember that when scanners were installed they were opened by the Minister of health, you got your photo in the paper- it was a major expense. In 1975 an EMI CT scanner cost $ 330.00 A$- that was about 20 years salary for a radiographer!. The twin slice head only 160 X 160 martix 6.5 or 4 minute scans ( with 30 second further processing) changed lives and medicine forever.