VIENNA - Mobile x-ray systems that can be maneuvered in and out of tight corners, low-cost and robust units designed for use in these challenging economic times, and an improved approach to mammography -- these aspects are visible to all delegates when studying the new offerings in digital radiography (DR) on display in the European Congress of Radiology (ECR) technical exhibition.

Sectra sold MicroDose, its digital mammography technology, to Philips last year, but that does not mean that the Swedish company has abandoned its interest in women's health, the original focus of its research efforts. On the contrary, Sectra is still active in the field, concentrating on providing software solutions for the problems facing other DR companies in providing more clinically powerful yet cost-effective services. 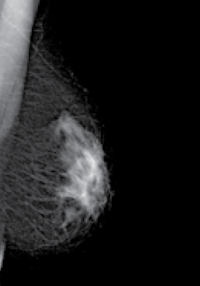 The photon-counting technology used by MicroDose allows for single-shot spectral image acquisition, which is currently under development. (Provided by Philips)

In particular, the company is helping to advance what is arguably the most significant development in mammography screening since digital x-ray systems became widely available more than a decade ago. As its name implies, breast tomosynthesis is rather like a combination of traditional 2D radiography and 3D CT in which a series of around 15 images is taken through a limited arc rather than a full 360°.

"One of the problems with digital mammography is the effects of overlaying tissues. Tomosynthesis provides an expanded view in which the radiologist can review images in different projections, which makes it easier to spot suspicious lesions when they are overlaid by other tissues," noted Mats Bjornemo, director of product marketing with Sectra.

Analyzing multiple images in the high throughput environment of a national screening program requires fast and efficient data handling, so the company has been working with leading player Hologic, plus other companies with a growing presence in this field, such as Siemens and Bracco. The result is Sectra's Breast Imaging PACS, which features multimodality capabilities and aims to offer instant access to all the advanced diagnostic tools needed by a radiologist in a single workstation. Regardless of the modality or vendor, all breast images are automatically aligned and displayed side-by-side in the same size and dimension. A computer-aided detection (CAD) display is an integrated part of the workstation, and the ergonomic keypad offers fast and easy access to the most commonly used tools, according to the company.

Sectra has also spotted an opportunity to use a routine breast screening appointment to identify women at risk of developing another disease mainly affecting women older than 50 years: osteoporosis. This is one of the most costly of all medical conditions because of the suffering and economic damage caused by the resulting fractures, yet if it is caught in its early stages, medical treatment can be straightforward and cheap. At ECR, the company is displaying its One Screen system for monitoring changes in bone density in the at-risk group. 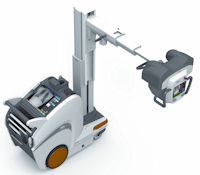 The DRX-Revolution 2 system from Carestream will be commercially available from mid-2012. (Provided by Carestream)

"During the screening, you ask the woman to put her hand on the mammography unit and it takes a normal hand x-ray. That is sent to our online imaging lab where we do a bone mineral density analysis. So we return an osteoporosis risk assessment for that woman at the same time as her breast cancer screening exam, which makes the whole process very cost efficient," Bjornemo explained.

After acquiring the MicroDose system, Philips has begun further development work on a technology that already offers high clinical performance combined with a reduced risk to the health of women being screened.

"This is a quick, convenient, and comfortable mammography solution with up to 50% reduced radiation exposure, as compared to other full-field digital mammography systems," said Kim Holttum, general manager of Women's Healthcare at Philips. "What differentiates our system from all the other systems on the market is its unique state-of-the-art photon-counting technology. It is thanks to this unique detector system that we achieve this significant dose reduction without compromising clinical image quality."

The vendor is concentrating on developing solutions for some of the more challenging cases that present in a screening program, notably women with unusually dense or fatty breast tissue.

"The photon-counting technology used by MicroDose allows for single-shot spectral image acquisition, which is currently under development. The spectral information would come as a bonus to the normal mammogram since it is acquired in the same exposure, without compromising image quality or increasing dose. The radiologist will thus be able to obtain additional information from the mammogram without additional radiation dose and additional exposure time," she explained.

When caring for patients who are too sick to be moved to the radiology department, hospital staff members are now demanding the same performance from mobile digital x-ray machines that would be expected from the main unit. At ECR, two leading manufacturers are both demonstrating advanced mobile units that they are calling "a radiology room on wheels."

GE Healthcare is displaying its Optima XR220amx system, a compact mobile machine that reportedly can acquire fast, low-dose images for physicians working in the accident and emergency unit, intensive care, and/or other challenging clinical settings. At the core of the system is the Flashpad wireless digital detector that aims to provide the productivity, image quality, and functionality of a radiology room at the point of care. It offers a number of practical advantages, including fewer delays due to shorter boot-up times, automatic charging, and easy storage. 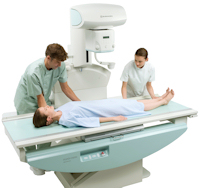 Carestream is exhibiting its DRX-Revolution system, which will be commercially available from mid-2012. The unit is both smaller than its predecessors and easier to maneuver through the crowded corridors of a busy modern hospital. The unit is powered by two independent drive motors and can be turned on the spot through a 360° turn -- although such sudden changes of direction may be unnecessary as the machine has an automatic collapsible column, which gives the operator a much clearer view of the way ahead. Despite its relatively small size, the machine has been designed with plenty of storage space built into the bodywork, according to Jane Grimsley, European marketing manager for Carestream's digital radiology business.

"There are places to keep all the materials that a radiographer is likely to need on the ward -- such as pens, paperwork, sanitizers, gloves, etc. -- and which may result in wasted time if they have to go looking for them. So the technician has everything that he or she needs immediately on hand, which is why we are calling it an x-ray room on wheels," she noted.

Similar very practical considerations lie behind a recent offering from Siemens. As part of its Agenda 2013 initiative, created in response to the increased cost pressures facing healthcare providers around the globe, the company has launched its Multix Fusion radiography system. This product is designed to allow small and medium-sized hospitals to deploy technology already proved in high-end systems at a time when every investment decision has to be justified. It is a high-tech solution for a tight budget, explained Alexandra Proell, marketing manager for Siemens' DR business.

The system supports the full spectrum of clinical applications but is much more affordable than comparable predecessor models, she added. It also features components that until now were offered only in the upper price segments, such as the height-adjustable, 300-kg-capacity examination table. Indeed, some of the important mechanical elements of the Multix Fusion unit, such as the ceiling-mounted x-ray tube and bucky wall stand, were adopted from the company's top-of-the-range Ysio system.

At the Shimadzu booth, the Flexavision F3 is on display. This digital radiography/fluoroscopy (R/F) system has a portable dynamic flat-panel detector with a field-of-view measuring 35 x 43 cm. It offers a range of examinations, from barium enema to gastrointestinal, nonvascular radiological interventions, urograms, and other urinary tract contrast media acquisition. General radiographic examinations of the thorax, pelvic region, and extremities can be performed, and the device can be used for orthopedic surgical procedures.