December 17, 2012 -- Detailed analysis of two mummies has revealed that conspirators murdered Egyptian king Ramesses III by cutting his throat, according to an Italian-led study published today by BMJ.

The fate of Ramesses III has long been the subject of debate. Ramesses III, the second pharaoh of the 20th dynasty, is believed to have reigned from 1186 BC to 1155 BC. The discovery of papyrus trial documents show that in 1155 BC members of his harem made an attempt on his life as part of a palace coup. The conspiracy was led by Tiye, one of his two known wives, and her son Prince Pentawere, who would inherit the throne, but it is unclear whether the plot was successful. 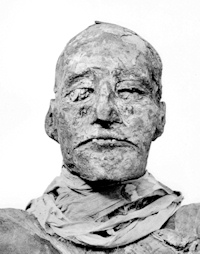 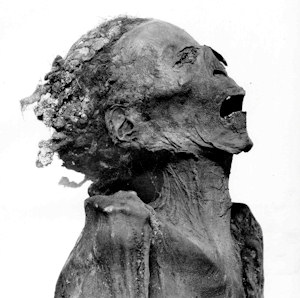 A team of researchers, led by paleopathologist Albert Zink from the Institute for Mummies and the Iceman of the European Academy of Bolzano/Bozen in Italy, undertook detailed anthropological and forensic analyses on the mummies of Ramesses III and "unknown man E," the suspected son of the pharaoh.

CT scans were performed using a Somatom Emotion 6 system (Siemens Healthcare) installed on a truck. Using sterilized biopsy needles, bone samples were taken from different body areas of the mummies (left and right humerus, tibia and femur, iliac bone) and immediately transferred into sterile tubes. Bone sampling was done under sterile conditions in a dedicated room of the Egyptian Museum in Cairo.

All staff involved in the sampling wore protective clothing, sterile gloves, and face masks to prevent exogenous contamination. DNA extraction and purification were performed in a dedicated lab in the Egyptian Museum and replicated in a second lab at the Faculty of Medicine in Cairo University. The researchers did a genetic kinship analysis to investigate a possible family relationship between Ramesses III and unknown man E.

The CT scans of Ramesses III revealed a wide and deep wound in the throat of the mummy, probably caused by a sharp blade. It could have caused immediate death, the authors noted. The injury was roughly 70-mm wide and extended to the bones (fifth to seventh cervical vertebra), severing all soft-tissue areas in the anterior side of the neck. The trachea was clearly cut, and its proximal and distal ends were retracted and separated by about 30 mm. A small, focal cortical interruption at the anterior surface of vertebral body was visible, at the seventh cervical vertebra.

A Horus eye amulet also was found inside the wound, most probably inserted by the ancient Egyptian embalmers during the mummification process to promote healing. The neck was covered by a collar of thick linen layers. 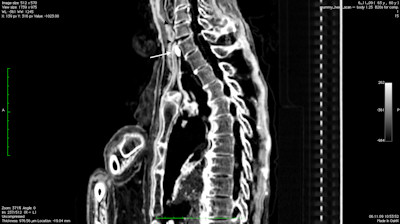 CT revealed a serious wound in the throat of Ramesses III's mummy, directly under the larynx. Copyright: A. Zink.

Analysis of unknown man E revealed an age of 18 to 20 years, while an inflated thorax and compressed skinfolds around the neck of the mummy suggests violent actions that led to death, such as strangulation, according to the authors. Furthermore, the body was not mummified in the usual way -- and was covered with a "ritually impure" goatskin, which could be interpreted as evidence for a punishment in the form of a nonroyal burial procedure. 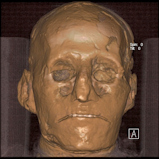 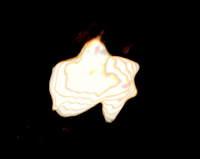 Left: 3D reconstruction of the mummy of Ramses III. Right: The researchers found a flat, irregular, foreign object lodged in the right lower rim of the mummy's wound. It was roughly 15 mm in diameter with a high CT density (2200 HU), similar to a semiprecious stone. Reconstruction of this object showed a "wedjet" (or Horus eye) amulet. The eye of Horus is a magical amulet that served as a metaphor of royal power, protection, and good health in ancient Egypt, they noted. Copyright of both images: A. Zink.

The authors believe that unknown man E could well be Pentawere, but they stress that the cause of death has to remain a matter of speculation. In addition, DNA analysis revealed that the mummies share the same parental lineage, strongly suggesting that they were father and son.

They conclude that Ramesses III was murdered during the harem conspiracy by cutting his throat. They add that the genetic relationship of unknown man E to Ramesses III, and his unusual mummification process -- including the ritually impure use of a goatskin to cover the body -- makes him a good candidate for Pentaware.

If you like this content, please share it with a colleague!
Related Reading
CT scrutinizes mummies from Egypt, Peru, Sudan
BMI Shirley Oak Hospital of Croydon, U.K., is working with the British Museum to image six mummies in the museum's permanent collection. The mummies range...

Paleoradiology: CT reveals mummy secrets to the world
It's not every day that a radiology department has the opportunity to evaluate the health of a 2,000-year-old mummy, but thanks to collaboration by an...

Austrian study uses MDCT to uncover tale of 12 mummies
Following the path of King Tut, Nefertiti, and other famed Egyptian figures, a collection of 500- to 1,000-year-old Chachapoyan mummies from northern...
CT reveals Nefertiti's secrets
German researchers used 64-slice CT to examine a bust of Nefertiti, discovering new details on the process used to make the sculpture of one of Egypt's...

Cold case closed: CT solves iceman's cause of death
You could say it's the oldest open "cold case" to date -- the death of the famous Alpine glacier iceman. Since he was discovered in 1991, his 5,300-year-old...
Copyright © 2012 AuntMinnieEurope.com