December 3, 2012 -- German researchers have used MRI to get a closer look at the potentially devastating neurological impact of high altitude sickness. In research presented at last week's RSNA congress in Chicago, they showed that mountain climbers can have traces of bleeding in the brain years after the initial incident.

High altitude cerebral edema (HACE) is a severe and often fatal condition that can affect mountain climbers, hikers, skiers, and travelers at high altitudes -- typically above 7,000 feet, or 2,300 meters. It results from swelling of brain tissue due to leakage of fluids from the capillaries. Symptoms include headache, loss of coordination, and decreasing levels of consciousness. It usually happens in a hostile environment where neither help nor proper diagnostic tools are available. 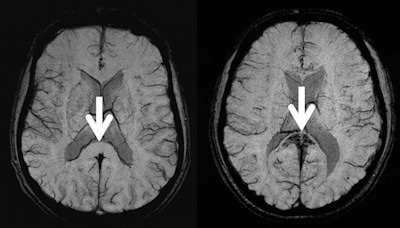 "It was previously thought that HACE did not leave any traces in the brains of survivors," said Dr. Michael Knauth, PhD, director of the University Medical Center Department of Neuroradiology in Göttingen. "Our studies show that this is not the case. For several years after, microhemorrhages or microbleeds are visible in the brains of HACE survivors."

Based on previous findings, two neuroradiologists who were blinded to the group identity of the mountaineers assessed all brain MRI studies. MR images were classified as positive, negative, or uncertain for HACE. An MRI score regarding the severity (number/location) of microhemorrhages was established.

Survivors of the most clinically severe cases of HACE had the most prominent evidence of microhemorrhages on MRI, according to the research group. The bleeds were found predominantly in the corpus callosum, which consists of densely packed nerve fibers connecting the two brain hemispheres, and they showed a characteristic distribution different from other vascular diseases such as vasculitis.

"The distribution of microhemorrhages is a new and sensitive MRI sign of HACE and can be detected years after HACE," Knauth said. "We will further analyze our clinical and MRI data on patients with acute mountain sickness, which is thought to be a precursor of HACE."

Yet he does not think HACE survivors need to give up climbing. "We cannot give such a strong recommendation," he said. "However, mountaineers who have already experienced HACE once should acclimatize to the altitude very slowly."