Adrian Dixon to step down at European Radiology in 2013

March 21, 2012 -- After six years in the post, Dr. Adrian Dixon will relinquish his role as editor-in-chief of European Radiology at the end of 2013. The need to fulfill other administrative duties is given as the reason for his decision to stand down.

Potential candidates for this influential job have plenty of time to brush up their CVs because the deadline for applications is 1 August 2012. They must also send a cover letter explaining why they are suitable for the post and outlining their future aims for the journal. 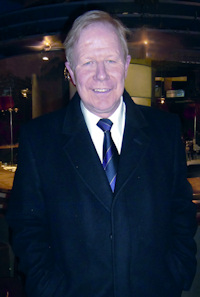 Dr. Adrian Dixon is a well-known figure in Cambridge, being the first medical Master of Peterhouse College since the early 16th century. Image courtesy of Deryck Chan.

Dixon was appointed editor-in-chief in March 2007 and is emeritus professor of radiology at the University of Cambridge, U.K. He was clinical director of radiology at Addenbrooke's Hospital in Cambridge from 1996 to 2002, and in June 2008 he was elected Master of Peterhouse, becoming only the second medical master in the college's long history, and the first since 1500.

The post is initially for five years, and it is open to established radiologists who are practicing radiology at staff/consultant level at a renowned institution, the statement continues. Candidates must demonstrate a strong record in scientific publication and experience of editorial work, at least at editorial-board level, for an internationally respected radiology journal. Also, they must be prepared to devote most of their professional week to the journal.

Applicants need to have a high standard of written and spoken English, as well as a wide knowledge of most branches of radiology, an international reputation as a researcher, an understanding of how radiology practice varies from country to country, and an ability to network effectively. They must be dynamic, well-organized, reliable, and able to prioritize and meet deadlines.

At a British Institute of Radiology (BIR) meeting held in York in March 2010, Dixon gave a visionary keynote lecture about the future of radiology. He offered some practical tips for working radiologists:

Also, he identified three important long-term trends: The realization that a well-conducted and well-interpreted cross-sectional imaging examination using high-tech equipment is far more reliable than many aspects of a clinical examination; the further replacement of conventional surgery with complex image-guided interventional procedures; and the development of larger groups of radiologists and radiographers working together to provide comprehensive imaging services and consultation to a wider group of clinicians.

Dixon was born in 1948 in Cambridge, the son of a long-standing fellow of King's College, Cambridge. He graduated in medicine from King's College in 1969 and pursued general medicine in Nottingham before specializing in radiology. After spells in pediatric radiology at London's Great Ormond Street Hospital and in CT at St Bartholomew's Hospital in London, he became a radiology lecturer at the University of Cambridge in 1979.

His areas of special interest are abdominal and musculoskeletal CT and MRI. He developed practice guidelines as chair of the Royal College of Radiologists (RCR) Guidelines Working Party from 1993 to 1998, and co-edited the fifth edition of Diagnostic Radiology -- A Textbook of Medical Imaging. He served on the National Institute of Clinical Excellence (NICE) from 1999 to 2002, as editor of Clinical Radiology from 1998 to 2002, as warden of the faculty of clinical radiology of the RCR from 2002 to 2006, and as MR clinical guardian to the U.K. Department of Health from 2004 to 2007.

Dixon was elected in 1998 as a founding Fellow of the U.K. Academy of Medical Sciences, one of very few radiologists to be so recognized. He received the President's Medal of the RCR in 2007 and the Barclay Prize of the British Institute of Radiology in 2008.