Politics blocks widespread use of breast MRI for implants

VIENNA - In the region served by the Ribera public hospital, around 10,000 women have received defective Poly Implant Prothese (PIP) implants, a population that would quickly overwhelm the radiology service if MRI examinations were authorized, according to Dr. Julia Camps Herrero, head of radiology at the center in Alzira, Valencia, Spain.

The hospital is examining an average of four women per day using ultrasound, considered sufficient to confirm an extracapsular rupture for symptomatic patients but not capable of detecting intracapsular rupture of silicone gel-filled breast implants in asymptomatic women. A long-awaited policy statement that will outline how her group should proceed is being drawn up by Spain's Ministry of Health. She noted that the reaction of implanting surgeons has been "Oops, I'm sorry," and that the surgeon responsible for the greatest number of implants has simply disappeared. 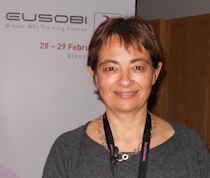 For a breast implant patient, a radiologist must always obtain a detailed patient history from the referring physician and surgeon, according to Dr. Julia Camps Herrero.

In the wake of the scandal over PIP implants, the indication for an MRI examination would seem not only to be clear, but also could even be considered a moral duty. MRI is unique for its ability to isolate an image of silicone to assess the integrity of the implant.

But two years after the PIP implants were first revealed to be nonmedical grade with an abnormal rate of rupture, moral responsibility has clashed with the economic cost of screening thousands of women using MRI. The issue has become political, said Herrero during her presentation about MRI of breast implants and oncoplastic reconstruction at last week's pre-European Congress of Radiology (ECR) training course organized by the European Society of Breast Imaging (EUSOBI).

It is estimated that 300,000 women worldwide have received the implants. Over the past couple of months, European governments have made diverse policy statements. Belgium advised women to have the implants removed, and if they decline, patients should have an MRI examination every six months. Hungary also recommended an annual MRI exam for women who do not wish or cannot afford to exchange the implants for another manufacturer's prosthesis. In the U.K., 2,860 women have been referred to National Health Service specialists because their private clinics have failed to help and more than 1,100 women have had MRI.

Herrero, who is breast section editor for Eurorad and was chair of the Breast Scientific Subcommittee at ECR 2012, provided course participants with a tour de force review of MRI for implant imaging. Using a three-step process, the water and lipid signals can be suppressed to isolate silicone. Intracapsular rupture may appear in one of a number of distinctive patterns, or signs, such as linguine, salad oil, or keyhole. Extracapsular rupture can clearly be seen with silicone goblets in breast tissue, but care must be taken with less trustworthy indications such as irregular margins of the implant, fat necrosis that may appear as a cancerous lymph node, and capsule herniation, she explained.

Beyond getting the specialized sequences right, she said, it is equally critical for a radiologist to gather a detailed patient history from the referring physician and surgeon. This needs to include the type of implant used, types of surgery performed, the type of radiation therapy applied, and the techniques of oncoplastic reconstruction that have been used, all of which will affect anatomy and the quality of the MRI interpretation.

"You really need to know what they have done to this patient," she said.