December 8, 2017 -- Peer review has, obviously, failed at BMJ. The authors of its breast screening study published on 5 December have completely misinterpreted their own data.

The facts are summarized in figure 3 belying their entire argument. When screening begins, a "prevalence peak" is expected, a sudden increase in the number of cancers detected. 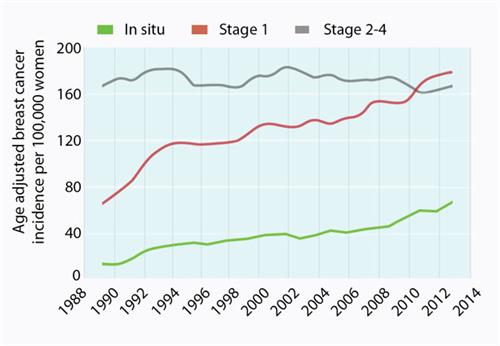 Trends in age adjusted breast cancer incidence by stage in women aged 50 or more in the Netherlands, 1989 to 2012.

Once the prevalence cancers are removed, the next time the women are screened (incidence screening) the test will find the cancers that reach the new level of detection (smaller due to mammography). This means the "incidence" of invasive cancers as women are repetitively screened should return to the rate that cancers were being detected in the absence of screening, but they will be at a smaller size. Unless the rate of "overdiagnosed" cancers (assuming there are any) increases over time, the rate will return toward the prescreening rate.

The authors have simply not understood their own data.